The election of the first African American President, Barack Obama in 2008, was celebrated worldwide. However, the situation of a large part of the African American community still remains outside of the American dream.

Dreams Deferred - legacy of American apartheid explores the realities of a system that supports exclusion effecting the African American community.

The film focuses on drug laws, stricter punishments and longer prison sentences, sentencing discrepancies, government subsidies to police forces stimulating drug arrests and confiscations, laws penalising a ’felony conviction’ with the loss of vote, loss of possible student loans, food stamps and public housing etc. The Children Defense Fund has estimated that 1 of 3 African American males will spend time in a prison or a jail within his lifetime.

It tells about present day community activists, organisations and individuals such as Michelle Alexander author of The New Jim Crow and Jamie Fellner from Human Rights Watch. It examines the effect, both physical and psychological, of the prison absence on the community and the family. From organisations such as Roseland Ceasefire doing work to prevent street violance to special schools in youth detention centres, it gives the viewer a deep understanding of the reality

American Director Joe Davidow, with a civil rights background, has lived in Europe for almost 30 years. He explores systematic exclusion in the US from a European viewpoint. 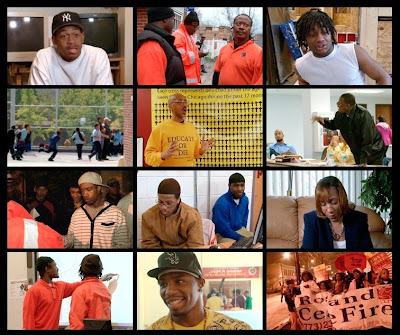